Tokanui Hospital was a psychiatric hospital, located approximately 14 kilometres south of Te Awamutu, New Zealand.  It opened in July 1912, and was pioneering in it's time - being self-sufficient with it's own farm, bakery, laundry and sewing room staffed by the patients.  At its peak over a thousand patients lived and worked in the hospital.  It closed in March 1998. 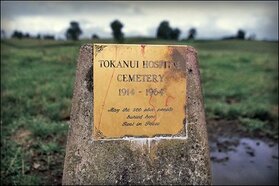 Either due to the stigma of mental illness at the time, or with the family living some distance away, those who died in the hospital were buried in the hospital's cemetery - the burials were carried out by patients and staff, and the Hospital was responsible for all burial records.  The first recorded burial was in June 1914, and the last one on 1 September 1964.

Since the Hospital closed, the Cemetery 'paddock' now found itself surrounded by an AgResearch farm.  ﻿They graciously allow access to the cemetery but between the hours of 7.00am to 4.30pm only, and as it is only accessible through the working farm Health & Safety laws and Biosecurity protocols apply.  If you are intending to visit the cemetery, you will need to go to our "Visiting the Cemetery" page and read and follow their policies and guidelines. You will also find a map and directions.
​
Out of the nearly 500 people buried here, for many years there was only one headstone in the cemetery, and a concrete Memorial in one corner of the cemetery area which reads:
​
"TOKANUI HOSPITAL CEMETERY
1914 - 1964,
May the 500 plus people buried here
Rest in Peace."
​
We wanted to see these people given back some dignity, which we are part way in achieving with a Memorial Wall completed and unveiled in February 2016, listing everyone buried here.  Publicity had been given in local newspapers and radio, and we are indebted to the many generous businesses and people who came forward contributing their services.  In the future, we would like to be able to have a plaque on each plot.

Several ex serviceman were identified as being among those buried here, and we worked with the RSA to give them the recognition they deserved.

A lot of work was done to compile/confirm the names/details of individuals buried at Tokanui.  469 people were ultimately verified - several had since been exhumed and re-buried in other cemeteries.

If you can help with information on someone buried here, or anything interesting about the cemetery, we would love to hear from you (see our "about us / contacts page" for links)

The maps below are to show the location of the cemetery.  If you are intending to visit, please see our "Visiting the Cemetery" page for more detailed information and what you need to know before accessing the site.
Powered by